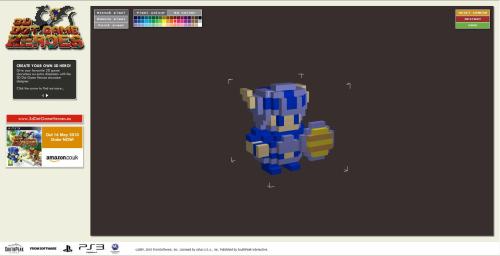 3D Dot Game Heroes’ european distributor, SouthPeak Games, has launched a nifty little website to promote the PAL release of the game.  Those of you looking forward to the game (or who have seen that crazy ad) probably know that you can make your hero look how ever you want via an in-game character creator:  Well, the guys at SouthPeak want gamers to get a jump on making their crazy adventurers.  The 3D Dot Game Heroes Character Creator is a very basic version of what’s going to be in the final game, but that shouldn’t stop you from designing that winged polar bear you’ve been dreaming of since you were 5.  Plus, once you’re done the site allows you to save your work as an avatar, an image or a wallpaper.

Unfortunately, You can’t upload your character to the game, but since it’s not the full character creator, why would you want to?  Instead, you should post your fantastical 8-bit ideas here at G4T.  3D Dot Game Heroes will be in stores on May 10th in the states, and May 14th in Europe.