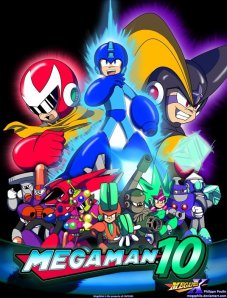 Downloadable games don’t seem likely candidates for post-launch DLC packs.  Most individual DLC packs for AAA titles cost anywhere from fifty to one-hundred percent of the price of the average downloadable game.  That said, most downloadable games don’t have the advantage of being the next entry in one of video gaming’s historic franchises.  Mega Man 10 was released today on Xbox Live, Wii and…  well, people who want to get the game on PSN will just have to hold their horses.  That said, the game itself is apparently just the first in a series of releases:  Capcom says that they will be adding five DLC packs in April that, together, almost double the cost of the game.

First, players will get the option to replay the full game as Mega Man’s relatively new friend, Bass ($2/200 MSP).  Then Capcom will release three extra “Special Stages”, each sold separately ($1/100 MSP).  Finally, at the end of April Capcom will make “Endless Attack Mode” available ($4/400 MSP).  In case you haven’t been counting, die-hard Mega Man fans should be prepared to drop an additional 8 dollars on the game, after the initial 10 dollar price-tag.

That’s not to say that paying more is a bad thing.  IGN, for instance, complained in their review that the game didn’t offer more gameplay.  It’s understandable that Capcom has added some of the more extraneous options as DLC in order to maintain the decidedly retro feel of the game.  What’s important is that there are new modes; players who want to see the series evolve can do so, while traditionalists aren’t distracted from the gameplay they know and love.

Regardless of whether you are angry or happy about Mega Man’s DLC, the surprising thing is that there is so much of it.  The fact that Capcom feels that a downloadable game, even for game from an established franchise, warrants the extra time and capital to develop DLC speaks volumes about the direction gaming is heading. 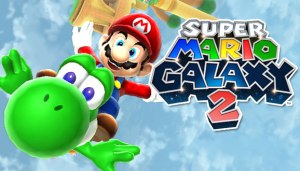 Nintendo held their US media summit San Francisco today.  At the conference, they announced the release dates for their first-party lineup for Spring and Summer, 2010.  Most exciting and surprising were the release dates for Super Mario Galaxy 2 and Metroid: Other M, which will both be in stores this spring.  Galaxy 2 will be coming out May 23’rd, while the new 2D Metroid is set to be released on June 27’th.  Frankly speaking, until yesterday’s hint from Nintendo’s Australian summit (They’re going to be having international “summits” all week), it was widely assumed that word would come at E3 that both games would be ready some time around Christmas.  Other interesting releases include the US release of Monster Hunter Tri (April 20’th) and  Sin & Punishment 2: Star Successor (June 7’th) and whole bunch WiiWare titles, including Mega Man 10 (March 1’st).

You might be asking; “well now that they’ve done all this, what is Nintendo gonna show at E3?”  Well, the word is that, regardless of what Nintendo says now, that they will be unveiling the DS-2 at this year’s big show.  Announcing AAA titles like Mario Galaxy 2 now will presumably free Nintendo of the responsibility to promote their releases at E3 so they can focus on the console launch.