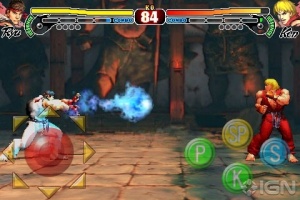 Capcom’s intriguing iPhone port of Street Fighter IV was priced and dated today.  According to Gamepro, the game will hit the app store some time next month and will run iPhone gamers a hefty ten dollars.   Ten bucks doesn’t seem like a lot in the greater scheme of things, but for an iPhone app, it’s a bit pricy.  Then again, the screens for the iPhone version look remarkably like the console version; they use the same half-cel-shaded art, and it doesn’t look like you think it would on a tiny non-gaming machine.

Capcom also revealed the game’s reduced roster: It’ll have eight characters; Ryu, Ken, Guile, Blanka, Chun-Li, Dhalsim, M. Bison and Abel.  Each character does have the their entire skill set from the console version, including super and ultra moves.  Capcom says they chose to reduce the number of characters, rather than cut their abilities.